Yesterday I wrote an article about my implementation of a blind digital signature voting scheme… however I got too technical. I used some scary math terms like “pick a unit of a field modulo p.” Yuck!

This signature is a way of verifying the authenticity of a document; it gives a person a receipt that verifies a transaction was valid or a document authorized/official.

Digital signatures are sort of a reverse of this system. Users sign documents using their private key and these documents are “tied” to the user’s public key; to verify a document, the verifier uses the public key of the signer, the signature, and the document.

Here is a high level diagram of the digital signature process: 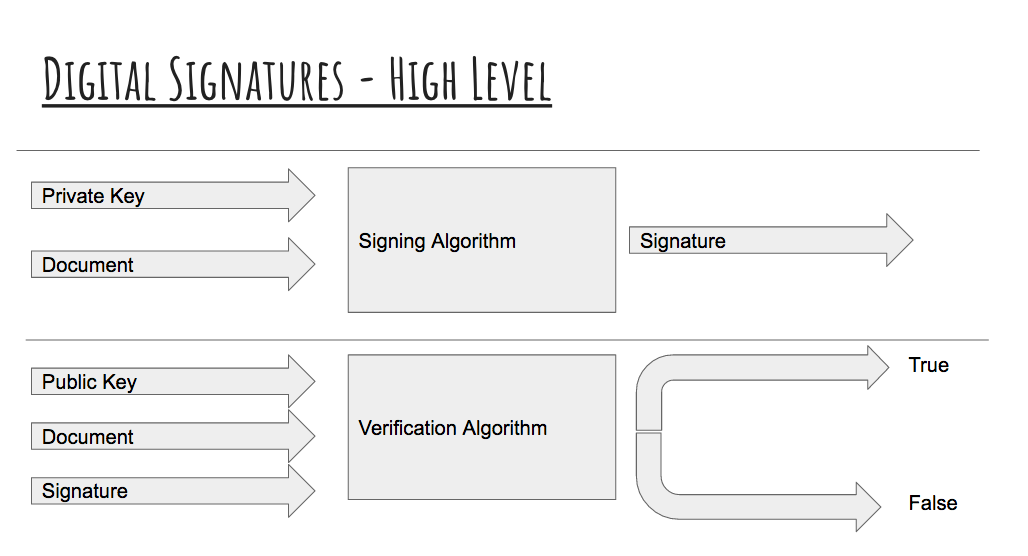 The best example is a secret election. It goes like this:

Problem: A trustee wants to hold a secret election. The electors cannot meet and will have to send in their votes. However, they value privacy and want their votes to be verifiable.

This is the voting scheme I implemented and discussed in my last post. I hope this less technical approach makes more sense!

Hope this article is easier to follow @pitterpatter @steemitqa @spartanza.

If you have any questions please ask below!

Does this use, or can it use a digital asset residing on a Blockchain as an identifier or the representation for the digital signature?

For Bitcoin, identification is done via wallet address. Each wallet address is a series of characters that is generated from a user’s public key. Attached to this public key is a private key. Thus, the user can digitally sign transactions from their wallet with their private key. In most attacks/hacks on cryptocurrencies, people trust their private keys to third parties and these third parties are hacked. Thus, the hacker gets the private keys of wallets and can use these keys to send verifiable transactions from the hacked wallets to themselves.

Can it work with a Blockchain?

Yep! It works with Bitcoin, other cryptocurrencies, and MANY other applications (one being voting).